Jim Collins is a student and teacher of what makes great companies tick, and a Socratic advisor to leaders in the business and social sectors. Having invested more than a quarter century in rigorous research, he has authored or coauthored a series of books that have sold in total more than 10 million copies worldwide. They include Good to Great, the #1 bestseller, which examines why some companies make the leap and others don’t; the enduring classic Built to Last, which discovers why some companies remain visionary for generations; How the Mighty Fall, which delves into how once-great companies can self-destruct; and Great by Choice, which uncovers the leadership behaviors for thriving in chaos and uncertainty.

"Best books to read before heading toward ipo"

I want it NOW! 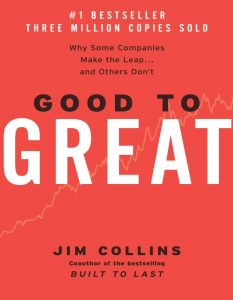 Wonder how to build a great company?

‘Good is the enemy of Great’. This is how the author sets off a riveting journey explaining the findings from his and his team’s half a decade of research in the conquest of how to make good companies great. Essentially, ‘Good to Great’ happens very rarely and it is because it is damn difficult. In his research, Jim Collins (the author), has found out systematic phases through which any great company goes through and lays out a framework as shown below: 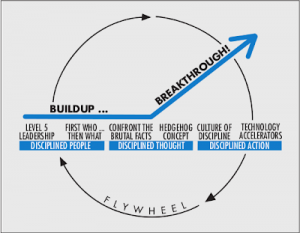 Lets devide into each of there components into a little detail: 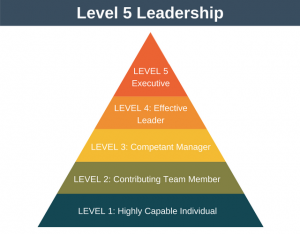 Research has shown that leaders who have brought the ‘Good to Great’ transformation are not the one’s who are charismatic or big personalities but are rather quiet, shy, deliberate. They are the one’s who have the combination of humility and professional will. Organisations that strive to become great need to have a Level 5 leader.

2. first who.. then what (Process stage: Buildup;Phase: Disciplined people)

It is a known fact that the right team is needed to achieve the success but what is even more important is to build the right team even before you know what and which path to take towards greatness and hence it is ‘first who..then what’. It is important to assemble a team of great people first and then decide on the strategy or vision for the company to make it great. The main reason is that when people join you for the strategy or the direction of the company then there is no guarantee that they will stick around or be equally motivated when the company changes its path. But those who are on the team because of someone else on the team will always be there to make the company great regardless of its direction. The author uses a phrase ‘getting right people on the bus AND getting wrong people off the bus’ and it is the ‘wrong people off the bus’ that is equally important. The only way to deliver to the people who are achieving is not to burden them with people who are not achieving.

Good-to-great companies Confront the Brutal Facts (Yet Never Lose Faith) in what they do.

They have cultures where their people have the opportunities to be heard and where the truth is ultimately heard. This is epitomised by the Stockdale Paradox which describes how you may retain absolute faith that you can prevail to the end despite the difficulties, and confront the most brutal facts of your organisation’s current situation. 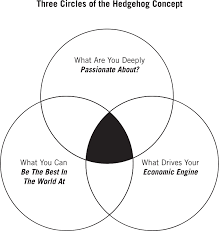 Good-to-great companies adopt the Hedgehog Concept (ie they are focused on being the best at only a few things at a time).

To follow their sterling examples, your company companies can form a council comprising your leading executive and between 5 to 12 key members of the management. Your company’s council should then focus on asking the following three questions (which form 3 circles): 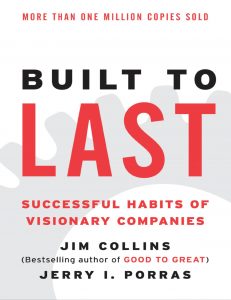 This book is the result of six years of research. Published in 1994 by James C. Collins (more commonly known as Jim Collins) and Jerry Porras, it’s long been a modern classic and has been translated in over 25 languages.

Collins and Porras conducted a survey among hundreds of CEOs of the world’s top corporations at the time and then compiled a list of 18 visionary companies, which they then thoroughly analyzed, investigated and compared with their non-visionary peers.

They wanted to find out what has helped them stay successful over decades, and, in some cases, even a century. Here are the 3 tidbits that most struck me:

The first idea going to blown your mind!